Sabatti SKL-20 rifle: a modern design kipplauf for an hunting rifle with unique internal features which set it apart from other rifles of this type 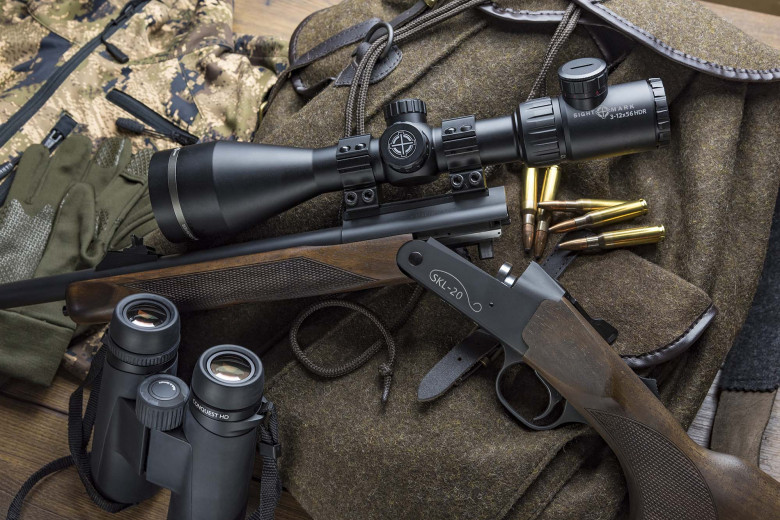 The new Sabatti SKL 20 is a single shot break action rifle specifically meant for alpine hunting which, while following the classic lines of the traditional kipplauf rifles, takes full advantage of the most modern materials and technologies to further enhance the lightness and accuracy features for which this kind of weapon is rightly famous.

The action is CNC machined from a billet of Ergal 55 aluminum alloy, with hard anodized black finish.
The breech adopts the classical Jaeger tilted block system found on the majority of kipplauf rifles, but takes a very different approach when it comes to the action locking system which, instead of using a bolt to lock on a notch in the underside of the Jaeger tilted block, adopts two conical plungers plungers with built-in wear take-up, seated in corresponding recesses midway of the barrel block: this limits vertical oscillation of the barrel during barrel time, enhancing the shooting accuracy.

The barrel block itself is longer than usual, granting greater support to the barrel. This ensures a far more rigid action, reduces barrel vibration and enhances accuracy and consistency. The barrel block larger dimensions also allow the handguard to lock directly on the block itself without touching the barrel, which is completely free-floated, thus eliminating one of the main causes of reduced accuracy in break action rifles. This makes the Sabatti SKL20 carbine as accurate as a well-made bolt action rifle.

The cold hammer forged barrel adopts the award winning Sabatti multiradial MRR rifling: it’s 24” (61 cm) long and has an M14x1 muzzle thread, protected by a cap of the same material and finish as the barrel, so that, when the thread protector is on the barrel it all looks like a single piece of blued steel.

The front sight is fixed, whilst the rear sight is adjustable. On a milled base on top of the barrel block an 11 mm dovetail insert allows the mounting of a rifle scope.

The rifle adopts the new Sabatti 2 lever trigger group, with specific machining methods and a carefully designed sear engagement, tuned to grant a crisp and flawless shot release, with no overtravel. The trigger group also has Sabatti new balanced trigger, that guarantees maximum safety even in case the rifle is dropped from a height with the hammer cocked.

The hammer is not armed by the action opening, but is manually actuated: a slider button at top of the grip allows the shooter to smoothly cock or decock the hammer, quickly and easily, allowing the safe transport of the rifle with a chambered round.

The SKL-20 is a sleek, graceful, light yet very accurate single shot rifle in the best alpine hunting tradition.

Go to the product page...

Do you need information?